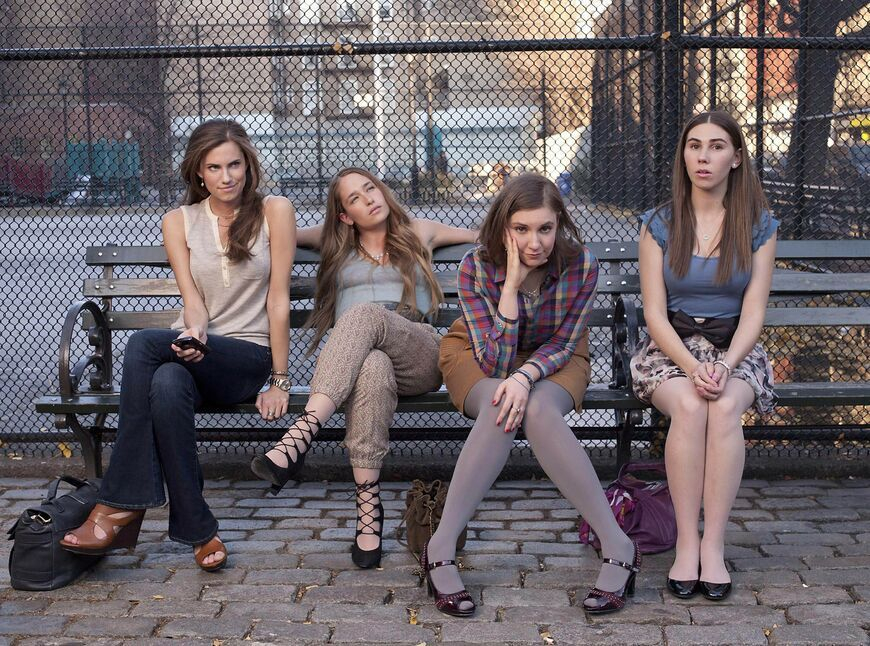 The cast of "Girls"

Lena Dunham's series Girls was hailed as an exciting and groundbreaking show with four female leads and a fresh approach on on-screen sex.

Lena Dunham’s series Girls, which screened on HBO between 2012 and 2014, was hailed at the time as an exciting and groundbreaking show. Girls is about four young women living in New York city, trying to cope with work, money and relationships. It was based on Lena’s own experiences of trying to be a writer. She wrote, directed and starred in the show.

Girls serves as an example of the female gaze because it sought to offer a more realistic version of women’s lives in New York than Sex and the City. Its young female characters have their flaws and obsessions and they work their way through a variety of common women’s experiences: female friendships, self esteem and body image problems, navigating relationships with men and deal with jobs, money and stability. At the time it aired, there were still very few TV shows with female protagonists and certainly not many of them as young.

Girls was lauded as groundbreaking on release but it has since fallen out of favour with many. The first season invoked criticism because of the all-white cast and its narrow focus on the relatively privileged lives of the characters. The second season was accused of tokenism.

Jenna Wortham wrote on the (now defunct) site Hairpin: “My chief beef is not simply that the girls in ‘Girls’ are white … The problem with ‘Girls’ is that while the show reaches — and succeeds, in many ways — to show female characters that are not caricatures, it feels alienating, a party of four engineered to appeal to a very specific subset of the television viewing audience, when the show has the potential to be so much bigger than that. And that is a huge fucking disappointment.”

Lena Dunham responded with a statement: “I am a half-Jew, half-WASP, and I wrote two Jews and two WASPs. Something I wanted to avoid was tokenism in casting. If I had one of the four girls, if, for example, she was African-American, I feel like—not that the experience of an African-American girl and a white girl are drastically different, but there has to be specificity to that experience [that] I wasn’t able to speak to. I really wrote the show from a gut-level place, and each character was a piece of me or based on someone close to me. And only later did I realize that it was four white girls.” She also spoke about the criticism of the series here.

Tambay Obensen wrote on Indiewire: “I think it’s silly to place that particular burden on a single show, and on one person’s shoulders. It’s not as if this is the first time we’ve seen network TV programs with all-white casts… I’m far less upset with the Lena Dunhams of the world, who are really writing from their own true-to-life experiences, no matter how shallow and insular we might think of them… The problem, as I see it, and as has long been the case, is one of variety – specifically, a lack of it, where black representation is concerned. We keep waiting, hoping, wishing that eventually the white executives who run the industry will suddenly have a change of perspective, and we become no longer invisible to them; but we’re continuously disappointed. So we fight over the few crumbs that we get annually.”

Rebecca Carroll wrote a piece for Gawker called “Lena Dunham’s Race Problem”. It included the question: “Supporters of Dunham’s work have said that even as a suddenly famous young writer and director smack dab in the media spotlight, she should not be expected to single-handedly dismantle racism in all of mainstream media. But shouldn’t she be?… If Dunham were to say to Remnick and Apatow, “Guys, you know what would be awesome? If we did a movie or an entire issue of a magazine or dedicated the whole New Yorker festival to conversations about centralizing racial representation in media,” they would likely listen, and that would be radical.”

Lena Dunham has also written and said a number of controversial things in the years since Girls. We won’t go into them here – Wikipedia has a list. Some might argue that the various controversies mean that Girls shouldn’t be included in the “female gaze” canon. Others might say that it made a path for what came later and also sparked a conversation that raised expectations as to what media should look like.