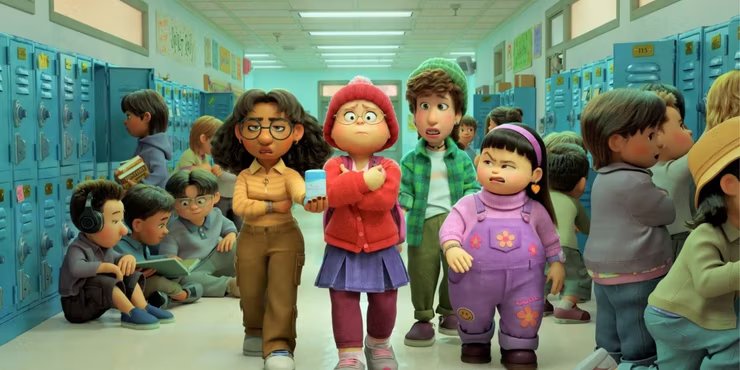 Turning Red tells the story of a 13 year old girl dealing with puberty and family problems... and she also turns into a red panda. It's an animated female gaze film.

Pixar’s 2022 animated film Turning Red tells the coming-of-age story of Mei, a 13 year old Chinese-Canadian girl who – due to a genetic “inheritance” – turns into a giant red panda whenever she experiences strong emotions. Turning Red is Pixar’s first feature film directed by a woman. Almost all of its characters are female and it deals with the specifics of female puberty and being a tween/teen girl. It’s fair to say that Turning Red is a fantastic example of the female gaze, one of the few times it occurs in animation.

Mei’s metamorphosis into a red panda is the film’s metaphor for the immense changes of puberty; when Mei first turns into a panda, her mother immediately assumes she has her period. The title “Turning Red” can be read as a euphemism for periods. Animated films aren’t known for mentioning menstruation; this one approaches it as both an everyday event and also as a source of embarrassment / humour. There’s a distinct feeling of recognition in how the topic is presented, one that reflects the overall female gaze of the film.

The film also addresses multi-generational trauma and the fraught relationship that girls often have with their mothers. The ritual to repress Mei’s panda can be seen as a capitulation to expectations of proper female behaviour. The appearances of Mei’s panda also serves as a metaphor for the cultural changes that come when a young person grows up in a mixed cultural environment. This intersectional perspective can also be considered to be part of the female gaze.

While there have been plenty of coming-of-age films featuring boys (Luca and Stand By Me immediately come to mind), not many have depicted 13-year-old girls, and certainly not in such a recognizable way. Mei and her nerdy friends are boy-crazy (fangirling over a typical early 2000s boy band), awkward, unfashionable and socially inept. They’re navigating a difficult time as best they can and looking out for each other the whole time. And while they may be ogling boys and unabashedly lusting after teen idols, the film doesn’t bother including a love interest for any of them. Their friendship remains the paramount relationship in the film and the one the fosters the most growth for Mei.

Ultimately, Turning Red embodies the female gaze by giving primacy to female experiences and female relationships. It was also written and directed by women.

Director Domee Shi started as an intern at Pixar in 2011 and helmed the company’s first female-directed film, the short Bao in 2017. She was invited to pitch for a feature film and offered three ideas, all of which dealt with teenage girls. Turning Red was partly based on her own experiences growing up as a Chinese Canadian in Toronto.

Shi deliberately made use of anime styling in creating the design of the film, particularly referencing Sailor Moon and a number of other Japanese animations featuring female protagonists.

Turning Red inspired what might be called “culture war controversy” when it was released in March 2022. Some online commenters expressed concerned that the depiction of puberty and menstruation was not appropriate for a children’s film. Parents also worried that Mei’s disobedience of her parents set a bad example. This despite the fact that many other films show children getting into adventures because they don’t do what their parents say.

Sean O’Connell from Cinemablend created an online backlash when he wrote that he didn’t find the film relatable because it was about an Asian, teenage girl: “There’s an audience out there for Turning Red… that audience is relatively small, and I’m not part of it.” He also tweeted: “Some Pixar films are made for a universal audience. Turning Red is not… This was exhausting.” Critics were quick to point out that films with male characters have been portrayed as the universal / default experience for years. Just because Mei is a teenage girl with an Asian background, it doesn’t prevent the film from depicting something many people can identify with, namely puberty and family problems. O’Connell eventually apologized and the review was removed from the site.

In fact, it might be a sign of how special Turning Red is that it’s attracting the kind of criticisms that aren’t really controversies at all, but rather baffled, individualized emotional explosions in response to a film that disobeys the expected rules about what it’s supposed to be.