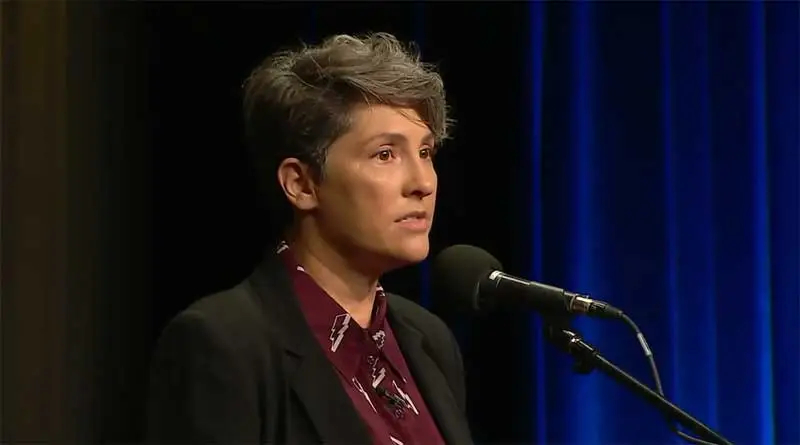 In 2016 Joey Soloway gave a keynote address at the Toronto International Film Festival (TIFF) about the female gaze.

In 2016 Joey Soloway (named Jill at the time) gave a keynote address at the Toronto International Film Festival (TIFF) about the female gaze. The official Youtube blurb says: Joey Soloway asks what it would take to bring it the forefront of film, art, and culture. By making space for women to take the lead in shaping female protagonism, can we get one step closer to igniting a revolution to overthrow the patriarchy?

Joey’s speech is an hour long and meanders a little. It’s also very lyrical and ends with a kind of poetry. If you don’t have time to watch, you can read the full transcript here.

Ultimately, Joey argues that the female gaze is more than a role reversal where women objectify men, or having a woman as the main character in a typical action film. It goes a step further and invites the viewer to feel as a woman feels. To go beyond simply seeing and instead to immerse oneself in feeling what the main character feels.

Soloway’s female gaze is also about communicating what it feels like to be looked at, to be objectified by the male gaze. And then, having pointed that out, to demand to become the subject, not the object.

Soloway says that there’s been 100 years of filmmaking and almost all films in that time have been made by men, about men’s experience. They suggest that society needs 100 years of just women filmmakers to even up the scales.

They also joke about the ubiquity of sport in culture and how this caters primarily to men. They suggest a world where women’s needs are catered to just as extensively, using “feminist arguing” as something they themselves wish had as much media and coverage.

Select Quotes From The Speech

Art is propaganda for the self… TV and filmmaking and fuck, all culture making — is people going, I’m okay! And people who are similar to me are okay!… We all need friends and so we make tribes with our art.

Protagonism is propaganda that protects and perpetuates privilege.

The Female Gaze. Part One. Reclaiming the body, using it with intention to communicate Feeling Seeing… It could be thought of as a subjective camera that attempts to get inside the protagonist, especially when the protagonist is not a cis male. It uses the frame to share and evoke a feeling of being in feeling, rather than seeing – the characters… Things maybe that you watch where you say, I can tell a woman wrote and directed it because I feel held… the emotions are being prioritized over the action.

Part Two. I also think the Female Gaze is also using the camera to take on the very nuanced, occasionally impossible task of showing us how it feels to be the object of the Gaze. The camera talks out at you from its position as the receiver of the gaze… This is how it feels to be seen. The gazed gaze.

This third thing involves the way the Female Gaze dares to return the gaze. It’s not the gazed gaze. It’s the gaze on the gazers. It’s about how it feels to stand here in the world having been seen our entire lives. Or, in a line I heard in a web series today, we don’t write culture, we’re written by it. It says we see you, seeing us. It says, I don’t want to be the object any longer, I would like to be the subject, and with that subjectivity I can name you as the object.

This part of the female gaze is a sociopolitical justice-demanding way of art making.

Roger Ebert said “film is an empathy machine” and this is true of television, and all story.

The Female Gaze is not a camera trick it is a privilege generator, It positions me, the woman, as the subject. On a journey. You will be on her side. You will be on my side. My camera, my script, my word on my notes, my side. I want you to see the Female Gaze as a conscious effort to create empathy as a political tool. It is a wresting away! Perhaps a wresting away of the point of view, of the power of the privilege propaganda for purposes – of changing the way the world feels for women when they move their bodies through the world feeling themselves as the subject.

This Female Gaze is a political platform, it means we start to call out how awful it is to be offered access in exchange for succeeding at being seen. The Female Gaze calls out how the Male Gaze divides us…

The Female Gaze can be a cultural critic. We can use it to call out all of those fucking storylines on those procedurals — that are meant to work as public service – meant to educate us about rape but they actually are just more rape…. What if only women were allowed to craft storylines about our bodies, about rape or consent for the next 100 years? Could we change the laws with our gaze? As we write and direct and produce our own truths about the violence on our bodies, it’s back to our bodies again.

Creating from inside of our own bodies and generating our own gaze, we can ask the important questions, say the things the dominant narratives have tried to distract us with.

We get divided by the male gaze – but we want our subjectivity back, we want to knit it back together, our wholeness and make it uncomfortable unacceptable to blatantly use us as objects, to turn us into slices to push you towards your own plot climaxes, of rescue or revenge.

The Female Gaze is political protagonism and it is not afraid to ask: What is toxic masculinity? When are we going to be done with it?

The Female Gaze is more than a camera or a shooting style, it is that empathy generator that says I was there in that room.

Joey Soloway is an American writer, TV showrunner, producer and director. They created, wrote and produced the Amazon series Transparent, about a family with a parent who comes out as transgender. This was inspired by Joey’s real life parent. Joey worked on HBOs Six Feet Under, I Love Dick, Grey’s Anatomy and Dirty Sexy Money. Joey has seven Emmy nominations and two wins. Joey identifies as non-binary, uses they/them pronouns and changed their name from Jill in 2020. More info on Wikipedia.