The Silence Of The Lambs 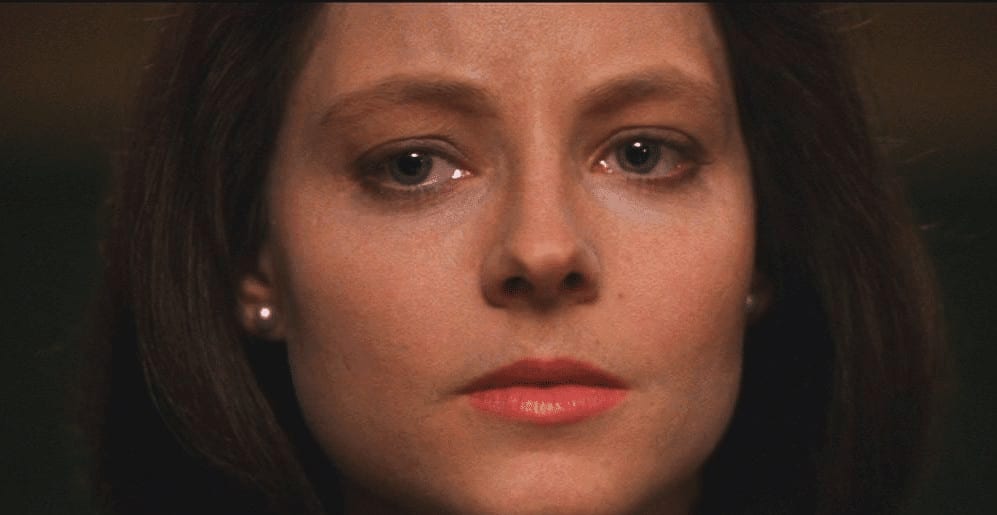 The Silence of the Lambs uses cinematography to subvert the male gaze and create a female perspective.

The Silence of the Lambs is a 1991, Oscar-winning film about a young female FBI agent’s hunt for a serial killer (find a summary of the plot at Wikipedia). While it was directed by a man (Jonathon Demme) based on a book by a male writer (Thomas Harris), the film can be considered a good example of the female gaze.

The film most obviously creates a female gaze through its cinematography and its use of looking – specifically how people look at protagonist Clarice Starling and also how Clarice herself sees things. The viewer is repeatedly put into Clarice’s shoes and encouraged to feel how she feels, both as subject and object of the gaze. It also does this by explicitly drawing attention to the male gaze, rather than offering it as a “default” position. We are encouraged to notice that men are looking at Clarice in judgemental, sexist or sexual ways and then to understand how it makes her life much harder than the average male FBI employee. We can see the sexism inherent in the various institutional situations that Clarice encounters.

The Silence Of The Lambs has a variety of compelling close-up shots, including this one of FBI director Jack Crawford:

In this shot, the director is addressing Clarise and – as you can see – he’s clearly sizing her up. He’s also staring directly into the lens, a shot that rarely happens in film. Several other characters do this, including Dr Chiltern, Clarise’s friend Ardelia Mapp, Buffalo Bill, most of the police department present at the autopsy, Barney the nurse and of course Hannibal Lecter. These shots only occur when the characters are speaking directly to Clarise. Meanwhile, the reverse angle closeup showing Clarise has her eyeline slightly off camera.

Clarise never looks down the lens at the other person. Clarice is the one doing the looking, even as she is being looked at. This method of shooting means that the viewer is often seeing things from Clarice’s perspective and is thus encouraged to see and feel things as she would. Confronted with the assessing gaze of Crawford, the creepy chauvinist looks by Chiltern, the hostile stares of the state troopers, or the penetrating study by Lecter, we better understand the psychological pressures that Clarice is under. Nicholas Barber writes for the BBC: “More than anything else, Silence of the Lambs is a film about what it’s like for women to be stared at by men. It’s no accident that Buffalo Bill got started as a serial killer by spying on his female neighbour, or that in his climactic showdown with Starling, he is watching her through night-vision goggles. Amazingly, Demme fashioned both a heart-stopping chiller and a militant feminist commentary on sexual harassment and the male gaze.”

Female Perspective and the Female Gaze

The camera also gives us Clarice’s perspective as she enters the asylum, searches the locked storage unit, or remembers her father. Each time, we’re empathizing with her, feeling what she feels

This style of shooting fulfils Joey Soloway’s three aims of female gaze filmmaking. Firstly, making women the subject, not the object, and making the body a place of feeling and experiencing. Secondly, illustrating what it feels like to move through the world as an object of the male gaze. And thirdly, to boldly return that gaze.

The various shots of Clarice being looked at all build to the climax of the film, where Buffalo Bill stalks her in the dark, watching her through infrared glasses. In this scene, Clarice is physically unable to control being looked at; she cannot return the gaze or avoid it. Yet she triumphs. In the end, her reflexes, her training and her bravery mean she is able to save herself from Bill, even when he* has the visual upper hand.

Director Demme goes so far as to make looking a vital part of the plot. Hannibal’s hint to Clarice as to the identity of Buffalo Bill is one that discusses the gaze. “He covets. That’s his nature. And how do we begin to covet, Clarice?… We begin by coveting what we see every day. Don’t you feel eyes moving over your body, Clarice? And don’t your eyes seek out the things you want?” This ultimately leads Clarice to put herself into the killer’s shoes, by reproducing what he himself is looking at. This leads her to her goal.

The Silence Of The Lambs has been criticized for its transphobia. This essay goes into detail and argues that the film creates a “transphobic dichotomy with cisgender and transgender positioned as moral opposites.” The theme of looking means the film makes Buffalo Bill / Jame Gumb construct womanhood through the process of being seen. The scene in which Bill looks into a mirror (and into the camera) and tucks his penis shows us that Bill wants to be looked at and admired sexually as a woman. This sits in opposition to the way Clarice resists being looked at in a sexual way. One could argue that this scene adds to the general way that the transness of Bill is pathologised by the film.

In 2014 Director Jonathon Demme told The Daily Beast: “…This is my directorial failing in making The Silence of the Lambs—that I didn’t find ways to emphasize the fact that he was someone who was terribly abused as a child, and as a result of the abuse he suffered as a child, had extreme self-loathing, and whose life had become a series of efforts to not be himself anymore. The idea is that by turning himself into a female, then surely Gumb can feel like he has escaped himself… We were all banking a little too much on the metaphor of the Death’s-head moth—that Gumb is trying to achieve a metamorphosis through making his human suit. We didn’t fortify and clarify that enough. That said, when the film was accused of continuing a history of stereotypical negative portrayals of gay characters, that was a wake-up call for me as a filmmaker, and as a person.”

Feminine perspective and power in The Silence of the Lambs by C.H. Newell

* I’m using the pronoun used in the film and the quotes for the sake of clarity. No alternative pronoun is offered by the film.