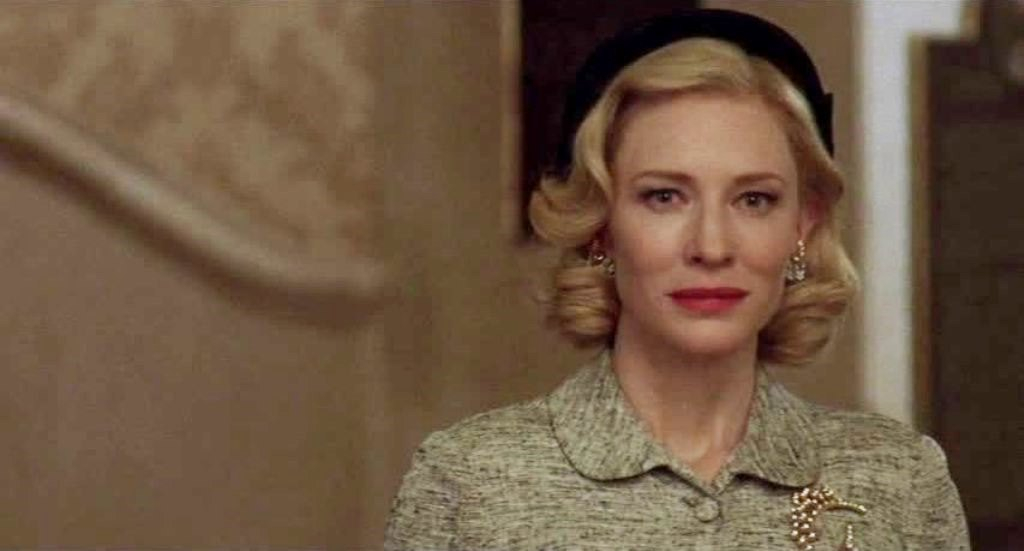 Carol is a love story between two women, set in the 1950s. It has a focus on looking, on meaning glances and touches, as part of the lesbian gaze.

Carol tells the story of young shop assistant Therese (Rooney Mara), who has an intense lesbian relationship with older woman Carol (Cate Blanchett). Based on the 1952 novel The Price of Salt by Patricia Highsmith, Carol is an example of the female gaze – specifically the lesbian gaze.

Reflecting the oppressive atmosphere of the 50s, the romance of Carol unfolds in a restrained way. Despite the intensity of the relationship and it’s love-at-first-sight beginnings, the film is subtle and takes its time, offering sparse dialogue. Instead, it focuses on the way the two lead characters look at each other and the way that even small movements and touch can hold meaning. In a world where such love cannot be overt, the film has the characters showing their feelings, rather than speaking them.

Looking With The Lesbian Gaze

When Carol and Therese first spot each other in the department store, the audience is invited to feel the instant attraction as each character gazes into the camera. They share these looks throughout the film. At the moment just before they finally declare themselves, both characters gaze at each other in the mirror, Carol standing behind Therese, her hands gently on her shoulders. It’s a moment where desire solidifies; their love is finally reflected back at each other. And they are able to look without hiding it.

Natalie Wilson writes in Ms: “While the emphasis is on Carol and Therese looking at one another with palpable longing, it also surfaces questions as to what it means to look and be looked at as a female while trying to perform femininity in a way that does not put one’s job—or life—in danger… Carol emphasizes the tangled and shifting nature of love via a focus not only on the web-like threads that bind people to one another, but also via its emphasis on mirrors, windows, and reflections. Carol and Therese look hungrily at one another throughout the movie—especially when hotel rooms allow them the coveted privacy that stores, restaurants, and car windows do not.”

The film makes use of a “voyeuristic” camera style to emphasise the furtive and covert nature of their relationship. Therese looks at Carol through windows, watching her walk away, seeing her fight with her husband. Therese herself is a photographer and uses her camera to look at Carol, capturing her desire in photos, even though she has previously felt that photos of people invade privacy.

Carol’s lesbian gaze is also embodied by the simple fact that this is a film without melodrama or an “agenda”. It’s realistic and it has a happy ending. When so many Hollywood films focus on gay tragedy, a simple story of two women falling in love is unusual. Scriptwriter Phyllis Nagy told The Laughing Lesbian: “What I knew going in to the adaptation was that Pat’s lack of psychologizing about Carol and Therese’s sexual attraction, and ultimately their love, had to be maintained. It could not be corrupted by an impulse to indulge in any number of dramatic narrative clichés about guilt concerning one’s sexuality or the like.”

Cate Blanchett briefly talkes about the lesbian female gaze in this interview:

The book was first adapted by Phyllis Nagy in 1997 and the script went through many iterations while the film was stuck in development purgatory for years. Nagy told Slate that film executives didn’t necessarily baulk at the lesbian aspect of the film. “Having two women leads was the issue.” After multiple changes of director and various obstacles, the film was finally made in 2015. Director Todd Haynes is openly gay and his previous films include Velvet Goldmine and Far From Heaven.

The film screened at multiple festivals and received over 100 awards and honours. It was nominated for various Oscars but was passed over for Best Film and Best Director categories. Marcie Bianco wrote in Quartz that Todd Haynes “…structured the film to elevate the power of women’s gaze. In this regard, Carol flips convention: men’s roles are marginal and antagonistic, while women and their desires wield power. The film is about looking—looking as a woman, at other women. The power of the film is allocated and harnessed by women—by their gaze, and by their actions—for each other…. That the Academy—with a membership primarily comprised of older men—overlooked Carol in the “Best Picture” category suggests that it does not value women as subjects of desire.”