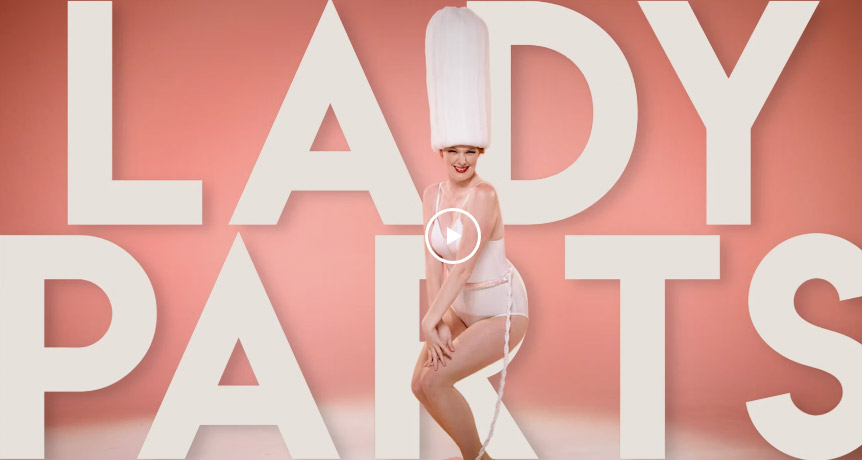 LADY PARTS offers scathing social commentary on the male gaze in Hollywood film. Plus it has a very catchy song sung by a tap dancing tampon.

Lady Parts is absolutely worth the 10 minute watch. For a start, it features a catchy advertising tune about menstruation sung by a tap-dancing tampon. And secondly, its drama relies on a scathing commentary of how the male gaze shapes films in Hollywood. This short centres the female perspective and gives voice to the very real anger about how women continue to be treated in a male-dominated industry. It very deliberately switches between a male and female gaze during the scene of a the film-within-a-film.

Lady Parts was directed by Jessica Sherif and Erin Rye. The latter stars and absolutely shines in her role. Erin also wrote and produced the film.

In an interview with Girl Talk HQ, Erin Rye said:

The female gaze is so important. It’s sometimes hard to define, but it has to do with the way women look at ourselves and each other. For example, I open the film quite scantily clad as a tap-dancing tampon, but the way it’s shot, there’s nothing sexual about it. It’s ridiculous and humiliating, but the shots chosen aren’t objectifying. Later in the film, there’s a moment where I rip open my shirt and show my body, but it doesn’t feel exploitative. Partially that’s the female gaze at work in the writing, showing Liz’s agency in choosing to show her body to make a point, but it’s also present in the direction and cinematography.

The focus of the scene is not Liz’s body. We drew a sharp contrast to that in the the film within the film where the male director pushes in on the female character’s breasts without the actor’s consent and cutting her face out of the frame. For anyone who doesn’t fully understand what we mean by “the female gaze” that’s a great example!

LADY PARTS follows Liz, a struggling actor who goes from dancing tampon to her first real break, playing a meaty role in a financial drama by an acclaimed up-and-coming director… only to discover that things aren’t what they seem. She experiences a series of funny-because-they’re-true setbacks and putdowns as she barrels toward her breaking point and has to decide what is more important: her integrity or her career.

LADY PARTS offers scathing social commentary on a woman’s place in the workplace (in this case, a Hollywood film set) disguised as a life-sized, tap-dancing tampon.